On my last trip to Borneo I attended the Traditional Tattoo Expo is a tattoo convention. It’s a convention like no other held in the middle of the jungle. My aim was to be tattooed by one of the last Iban tribal tattooists. This truly was a last chance to inked by one of the tribal elders skilled in the ancient arts that had been passed down through millennia.

The 2014 Traditional Tattoo Expo ran from 28th to the 30th of November at the height of the monsoon season. I arrived in Kuching on the 27th excited to be taking part in a convention committed to promoting traditional machine free tattooing. Kuching is a small, vibrant city situated in the thick of the Borneo rainforest in the Sarawak state of Malaysian Borneo.

Borneo is a country dominated by lush rainforest, long winding rivers and ominous mountain peaks. The dense mountains are thick with foliage and remain inhospitable to humans prohibiting the destructive logging industry from damaging this unique eco system. The rest of the forest is not so fortunate and both animals and indigenous people have had their world damaged and polluted by the greed of the loggers.

I first went to Borneo in 2008. I spent time with members of the Iban tribe living with them and learning about their culture. The Iban are a division of the Dayak peoples of Borneo who mainly inhabit the Sarawak of Malaysian Borneo. In Borneo the ancient art of tattooing was lost for a generation as Christian culture displaced the traditional Iban way of life. It’s difficult for outsiders to learn the art of traditional hand tapped tattooing as the few elderly tattooists who are still practicing are reluctant to pass on their secrets. On this trip to Borneo my plan was not only to work at the convention but to get tattooed by one of the last tribal elders skilled in the ancient arts.

The Borneo Traditional Tattoo Expo is now in its third year and continues to grow in popularity with both tattooists and members of the public looking for a unique body art experience. How many other conventions can boost the fact they are held in the middle of a tropical rainforest?

On the first day of the convention I set my stall up and prepared to tattoo my close friend Akasha to demonstrate how my training in traditional Borneo handed tapped tattoos had influenced my machine based geometric dot work tattoos. The only problem was there was no electricity on site. Borneo tattoo conventions are very different to the corporate affairs held in Europe. The electricians were clearly operating on what the locals jokingly called ‘Borneo time’. They had been booked to be there at 7am to ensure all the artists had power before the convention opened but didn’t arrive until 2pm. Back in the UK this would have spelled disaster but the convention organizers where completely unperturbed. This relaxed kind of scheduling is normal in Borneo and things very much happen when they happen letting people be detached from expectation and rushing around strict timetables. Day one of the convention was closed to the public and was an artist only day. Due to the lack of power I spent most of the time at the bar making new friends and reacquainting with old. Despite the small size of the convention and the fact it is held in the middle of a tropical rainforest the artist roster featured people from all over the world. The cosmopolitan party atmosphere, alcohol and jungle humidity were a heady mix and the day ended with Akasha, a strict vegan, drinking a ladle of moonshine which contained a pickled crocodile penis. The evening was a blur of pulsating music, cigar smoke and night swimming.

I awoke the next day feeling surprising sprightly despite only 3 hours sleep. We arrived at the convention late by westerns standards but early when operating on Borneo time. The power was on today and as I applied the stencil to Askasha’s shoulder, monsoon rain started hammering down on the canvas above us. The water ran like a river under our feet and all over everything including the electrics. Tattooists downed tools and hastily moved equipment out of the path of the water. The power had to be cut for about 3 hours so we didn’t all get electrocuted. This meant the bar was very busy once again. The artists where unfazed by the monsoon interlude and hand tapped tattoos were the focus of the day

Later with the power restored I completed Akasha’s cubist industrial mandala tattoo. Afterwards I met my good tattooist friend Boy Skrang and his 72 year old uncle. Uncle Aki Skrang was the last of the elders from Boys Village on Skrang river that could tattoo in the ancient tribal style. He remembers tribal life before the missionaries arrived and began the destruction of the traditional way of life.

Boy Skrang had arranged for his uncle to tattoo me, which was a real honor considering his skill and artistic heritage. I was excited to be receiving a tattoo off a tribal elder but my anxiety began to pick up as the old man tried to draw a fish hook on my ankle with an upside down biro. Boy laughed and told him to put his glasses on. At this point I started to realize the legend I was getting tattooed by was an old blind man!

Once we were happy with the marked on tattoo, Boy set up the tools for his uncle which were simply two sticks with a needle attached at the end of one of them. This may sound extremely primitive compared to modern, electric tattoo machines but this simple technology is capable of producing beautiful delicate designs.

Aki Skrang may have been using traditional techniques but he employed modern needles and inks. Traditionally sharpened pigs teeth were used as needles and the inks were a mixture of the burnt carbon from the bottom of cooking pots and heated animal fat. Hygiene concerns stopped us going fully traditional and his tools were a happy marriage of ancient and modern.

We sat on rattan matts, the jungle floor warming us from beneath, and the tribal elder began the painstaking ancient process of hand tapped tattooing. It was fascinating watching him work and an honor for him to come out of retirement to execute one of the last tattoos done by an Iban tribesman of the traditional generation. His eye sight may have been fading and his hands may have not been as steady as in his youth but for me it was a magical moment. I felt he was passing the hand tapped tattoo torch to me and I felt pride to be part of a new generation of tattooists keeping Iban culture alive.

Much has changed in Borneo since Europeans arrived with their technologies, culture and beliefs. It is a mixed blessing. No one would want to take away the benefits modern medicine, education and sanitation have brought to the Iban community but the erosion of their culture and the destruction of their environment have caused cataclysmic change. The question is how long can the old ways cling on as the modern world encroaches? This truly was a unique opportunity and in the next few years the last of the Iban traditional tattooists will be gone. That is why I want to go back to Borneo and document their art and way of life and talk with the tribal leaders about how we can stop the logging industry destroying the rainforest and the Iban way of life.

If you want to help go over to our Kickstarter page and pledge your support. 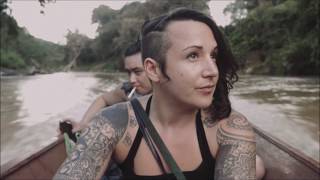 Point of No Return. Hand tapped tattooing in Borneo